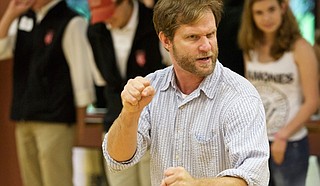 Millsaps associate theatre professor Peter Friedrich recently received the Seeking Solutions to Global Challenges Award from the Fulbright Program. The award, created to celebrate the 75th anniversary of the Fulbright Program in 2021, recognizes individuals who benefit the global community in any number of fields such as cyber security, climate change and cultural exchange.

The United States Department of State, the J. William Fulbright Foreign Scholarship Board and the Board of Directors of the Fulbright Finland Foundation in Helsinki, Finland selected Friedrich for the award. As part of the program, Friedrich will travel to Finland for five months in partnership with Åbo Akademi University in Turku to teach a program of his own making called “Dramatic Entrances,” which uses theater to create partnerships between college students and members of migrant communities.

"My program uses theater to forge these partnerships through joint activities that deliver diverse working experiences to students, as well as honing language skills for members of migrant communities," Friedrich says. "The goal is to create something sustainable and cost effective that will create job prospects for college students, especially for immigrant students who are not only entering a challenging economic environment, but face cultural and language challenges as well."

Friedrich joined the faculty at Millsaps in 2014. During his time there, he has led Millsaps students in producing their own devised theater programs, in which they have written more than 200 short plays on race, class, sexuality, ability and religion in the Deep South. He also produced a devised theatre program with individuals incarcerated at the U.S. Penitentiary in Yazoo City.

Friedrich was born in Chapel Hill, N.C., and graduated from Chapel Hill High School before enrolling at Goucher College in Baltimore, Md. He transferred to Santa Clara University in California, where he received a bachelor's degree in English in 1991. He went on to American Conservatory Theater in San Francisco, Cali., where he received a master's degree in acting in 1996.

After graduating, Friedrich acted in plays in New York City and in regional theaters around the country. After the September 11 terrorist attacks in New York City, he decided to change careers and enrolled at University of California, Los Angeles Extension to become a public school teacher in the Los Angeles Unified School District.

"I was one of many people who made major adjustments to their lives after 9/11," Friedrich says. "To me, I didn't see going from one audition to the next as something that would make the kind of difference in the world I wanted to. I initially looked into becoming a school psychologist, but it turned out I had enough classes for a life skills credential, which would let me teach in any number of public schools, work training centers and homeless centers in underserved communities. That kind of work was my first real encounter with immigrant communities."

In 2008, Friedrich saw a newspaper article about the newly opened American University of Iraq-Sulaimania and wrote a letter to apply there later that year. At AUIS, Friedrich primarily worked with Kurdish and Arab students, teaching Shakespeare and helping the students to produce original contemporary works of their own. In 2012, he directed a multi-lingual Shakespeare production with student actors who performed at the invitation of the Oregon Shakespeare Festival. Those students won the 2013 Contribution to the Field Award from the American Conservatory Theatre. In 2013 he moved back to Chapel Hill, where he learned of Millsaps' theater department and reputation and decided to join its faculty. Friedrich moved to Jackson for the position in 2014.

In addition to his work with the Millsaps theatre department, Friedrich is involved with the university's Black Athlete Empowerment program, serves as a faculty advisor for the men's football team and helps manage the annual Millsaps Get Out the Vote Drive. Friedrich also leads fundraising efforts for Habitat for Humanity.