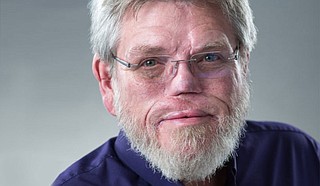 Bill Moore, an optometrist for Odom's Eye Care in Jackson, recently retired after 37 years with the business. The staff and management of the shop held a celebratory luncheon on Friday, April 9, to commemorate Moore's retirement.

Odom's Eye Care originally opened under the management of the late Richard Odom in 1947. The shop was originally located on the corner of State and Fortification streets and only filled prescriptions from area doctors. It moved to its current location in 1996. Odom's offers comprehensive eye exams, evaluation and treatment of eye diseases, eyewear prescription-filling services, frame repair and adjustment, and more.

Moore first began working as an optician at Odom’s Optical in Natchez with Robert Odom in 1986. He moved to the Jackson location on State Street in 1995 and worked with Robert’s brother, Joe Odom. He has worked at the Canton Mart Odom’s location since 1995.

During his time with Odom's, Moore was primarily responsible for cutting and crafting lenses to fit into frames and working with customers' prescriptions. He also helped customers pick out the best frames to suit their needs.

"Odom's has always been a great place to work because of the great atmosphere and the strong values the Odoms themselves have," Moore says. "I've had other offers come in over the years, but I've always loved where I was and didn't want to leave it. Whether I was selling glasses with Robert Odom in Natchez or Joe Odom in Jackson, they were great at being practical and making people feel at home in the store."

Moore was born in Jackson and attended Provine High School, but ultimately graduated from Davidson High School in Mobile, Ala. He later enrolled at the University of Southern Mississippi, where he received a bachelor's degree in history in 1980. After college he moved to upstate New York and spent two years working as a lumberjack in Saratoga Springs.

"I had initially planned to enroll at Duke University for graduate school, but that didn't end up working out," Moore says. "At the time my mother and her husband were living in Canada and the frustration led me to move up there and experience what real winters were like. My mother's husband was the president of a hardwood plant and let me work there, but I ultimately ended up coming back to Mississippi because it was just too cold for me up there."

After moving back to Mississippi, Moore ended up joining his father and older brother in the optometry business, working in a lab making lenses for glasses. While he had initially avoided the family business, Moore says he came to love the work after looking into it and decided to stay. He received all of his optometry training on the job beginning in 1983 and later moved to Natchez to work for Odom's Eye Care in 1986.

"What I eventually came to enjoy most about the work was helping people out just the right lenses and frames for them and build something that was just for them," Moore says. "I came to love learning the fashion behind all the different lenses and frames and watching how those trends changed overtime."

Now that he has retired, Moore is moving to Fayetteville, Ark., where he plans to spend his time traveling through the mountains and walking trails of the state, also as well as indulging in his hobbies of golfing and visiting bookstores.