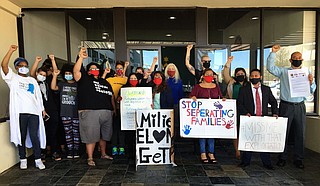 Advocates gathered at the International Museum of Muslim Cultures office on Capitol Street on April 8 to demand better treatment of immigrant workers. Photo by Kayode Crown

A letter to President Joe Biden is demanding action to address the plight of immigrant workers in the wake of the August 2019 federal raid of food-processing plants in six cities in Mississippi. Immigrant Alliance for Justice and Equity Organizing Secretary Efren Nunez, presented the letter Thursday to the U.S. Department of Labor Wage and Hour Division District Director Audrey Hall.

The letter demands the return of those deported after the raids to their families and communities, as well as the release of those still in detention. "Grant deferred action from deportation (and) work authorization for all the workers in the factory targeted by Trump's racist raid; and pardon those who suffered convictions stemming from ICE's raids, including for ID theft related to working, or for returning to their families," a collaboration of organizations asked.

Before the presentation, IAJE organized a press briefing at the International Museum of Muslim Culture in downtown Jackson. "The discrimination that we've received in this state for many years has been an attack on our community. That's why we are demanding Biden use his executive powers to stop the abuse of immigrant workers, that he affords us protection from these abuses that have been laid on our backs," Nunez told the media in Spanish with IAJE Executive Director Lorena Quiroz translating.

"We receive abuse (while) working (in) the poultry factories. We work hard, but we're not paid well, and we do it without adequate protection. We're not given an orientation and, for lack of work permit, we’re often not (able) to lift our voices (to ask for) a raise."

‘Do What is Right’

"We (call) on President Biden to do what is right, and to do what is within his power to undo the harm caused by the ICE raid of the Trump administration in 2019," she said. "We also know that the trauma and the harm are ongoing. Families remain separated through deportation; workers remain in detention for-profit; and employers continue to exploit immigrant workers."

SPLC staff attorney Vidhi Bamzai detailed the continued plight of immigrant workers in the state even as they continued to work as "essential workers" in Mississippi poultry plants during the COVID-19 pandemic. She said the raids traumatized communities, separated families, and instilled a culture of fear and mistrust that makes it harder to report dangerous conditions and abuses in the workplace.

"The Department of Labor must do more to create safe and just workplaces for immigrant workers in Mississippi; these workers must be protected from retaliation and discrimination in the workplace," she said. "The Biden-Harris administration must end ICE workplace raids like the ones that happened here in 2019."

"Today, a year and a half since those historic raids, community members and essential workers continue to face horrific conditions in the poultry industry, which is rife with abuse and exploitation, including sexual harassment, unsafe working conditions, wage theft and a myriad of other workplaces abuses," she added.

The letter to the president indicated that the immigrants do not speak out against workplace abuse and unsafe work conditions because of the threat of deportation. "Today, immigrants across the U.S. south continue to work in unsafe conditions, despite threats of retaliation, and are excluded from any COVID aid," the letter stated.