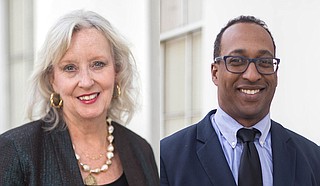 One out of every three dollars that the City of Jackson spent from the 1% sales-tax revenue from 2017 to 2020 went to Ward 7, a Jackson Free Press analysis of information obtained via records request shows.

Ward 7 is a large and varied district that contains upscale white neighborhoods such as Belhaven, Bellevue Oaks, Rolling Wood Beautiful, as well as downtown Jackson.

"I am not a member of the (1% Sales Tax) Commission and do not vote on its priorities," Ward 7 Councilwoman Virgi Lindsay said in a text message to the Jackson Free Press on Thursday, April 29. This was after the reporter left her a voice message asking to talk about the disparity between what Ward 2, a majority-Black district, gets from the 1% sales tax and others. The combined benefit to Wards 1 and 7 based on our analysis showed that the two wards got more than half of the total money spent from the 1% sales tax. They got $33,671,432.88 out of the total $66,303,849.43.

The 2011 legislation that established the commission requires the mayor to nominate three people to it and also appoint the chairman. The governor, lieutenant governor, and House speaker appoints one each, and the Greater Jackson Chamber Partnership appoints four members. Lumumba is the chairman after designating himself to the position. The members vote for a vice chairman and the secretary. Everyone serves without compensation.

In an April 3 phone interview with the Jackson Free Press, Lumumba explained that his position as chairman is mainly ceremonial and that he fights to get projects done in long-neglected places.

After this reporter told the mayor that Wards 1 and 7 get a lot of projects compared to the other wards based on an initial observation of the information obtained March 16 from a record-request filing, he disputed that, saying "that's been a drumbeat honestly by some councilpersons that want to make a point. We've done projects since we've been in office all over."

Lumumba also argued that getting the appropriate dollar amount for itemized projects will give a better picture. "You (would) need to not only know the number of projects that (are) in each area, but the cost," he said. "Medgar Evers (Boulevard) doesn't cost what Ridgewood Road costs. Medgar Evers is concrete, for instance, so the cost of repaving a concrete street and the remediation that it takes is far more expensive than what it costs for just (putting) black tar on the road."

On March 30, before the interview with the mayor, the Jackson Free Press requested the corresponding dollar amount to the projects in the initial listing provided March 16. The April 21 reply formed the basis of this report.

It showed that Medgar Evers Boulevard, covering Wards 3 and 4 from the list, cost $4.6 million in 1% sales tax. The non-scientific analysis that the Jackson Free Press used involved dividing that amount into two (number of wards covered) and adding each half to both wards. We repeated the same procedure for other projects with more than one benefiting ward, dividing the amount by two, three or seven if it covers all the wards.

Lumumba said the residents know his administration has been working by delivering projects in the various wards. "When's the last time residents in Jackson can say that Capitol Street, Ellis Avenue, Robinson Road, Medgar Evers, Mill Street, Bailey Avenue (were paved)?” he asked, mentioning projects under various tags on the list. "All of those are long thoroughfares in Wards 3 through 6."

An April 5 request for the different iterations of the master plan by the 1% Sales Tax Commission yielded a response on April 16 of two files dated 2017 and 2019, the latter being a review and an update of the former.

The item on the alphabetical list with the highest cost is “Street resurfacing project A,” which gulped $9,967,972.32. It covers Wards 1 and 7. Next to it is ‘Street Resurfacing project B’ at $5,275,949.51, which based on a May 2020 announcement covers Canton Mart Road, Old Canton Road, Northside Drive, Pear Orchard Road, Lakeland Drive, N. Gallatin Street, Jefferson Street, Bailey Avenue, Ellis Avenue, Belvedere Drive, McDowell Road, and Oak Forest Drive. It covers Wards 3, 5 and 6, the list indicated.

Twelve of the 24 items were single-ward focused. Of those 12, eight were for Ward 7, raking up the dollar amount to $11,894,942.44 even before the reporter started adding the other items that combine Ward 7 with others.

Ward 2's only standalone project is “Woodway Drive Bridge Replacement” for $390,671. Of the 12 that included a combination of wards, five contained Ward 7.

Ward 7, therefore, was featured in a total of 17 out of 24 items. Though Ward 3 does not have a standalone project, it combines with others eight different times.

Two items cover all the wards. They are tagged “consent decree program management” at $1.4 million and “Operation Orange Cone-Residential Streets Contract” for $11,124,581.31.

‘Ward Comparison Is Not Particularly Accurate’

"[T]he ward numbers are not particularly relevant because there are numerous projects that are city-wide or have benefit to residents of a ward even if it is not where they reside such as Northside Drive repaving or water line work," former Ward 2 Councilman Priester told the Jackson Free Press on Thursday, April 29.

Priester resigned as Ward 2 Councilman in October after seven years to focus on his law practice. He did not answer the reporter's phone call on Thursday, April 29, but responded to the reporter's text message, saying that he was in a deposition as part of his work as an attorney.

In a series of text messages exchanged with this reporter, Priester said a focus on what dollar amount goes to each ward gives an incomplete picture after hearing that Ward 2 got about one-tenth of the funds that Ward 7 obtained from the 1% sales tax.

"A ward comparison with the 1%-commission is something of a red herring, especially if you don't look at total infrastructure spending by the City. It's like having a family where both parents work, and they have seven kids,” Priester texted. “Looking at how much the husband spends on each child doesn't say much. What did the wife spend on the child? What were the needs of each child? Did any of the kids have an emergency or go to college? Did one kid get a car in 2016, so you spend less on that kid and more on another two years later?"

While reiterating that "ward comparison is not particularly accurate," Priester said, "the TIGER Grant definitely includes Ward 2. It involved (resolving) major interruptions to the Tugaloo community and is a benefit to them.” City records show that the TIGER Grant covers Wards 1,3, and 7, with $5 million from the 1% Sales tax.

Priester said that he believes the basic public works and county budgets should fund infrastructural objectives, not the 1% sales tax.

"Although I certainly wish Ward 2 had more money, I never felt that the 1% budget was going to fluff projects," he added. "There were certain emergencies where the commission spending was a backstop that saved the City at moments in the cycle when we were cash poor on the water infrastructure side."