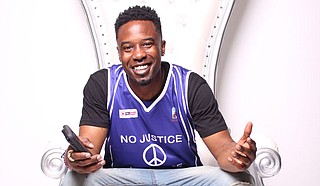 “We lost everything,” Robert Martez Hopkins says when describing the start of Knowledge Camp University’s basketball program. “We started out with four teams. For two years in a row, all four teams lost all eight games in a row. We was horrible! But we stuck with it and kept on chipping away, and today (July 29) my 10-year-old team is playing in the championship game (they won), and my 8-year-old team is in second place in the league this year.”

Hopkins grew up in south Jackson, graduating from Forest Hill High School in 2000 and enrolling in Copiah-Lincoln Community College on a basketball scholarship, where he earned an associate’s degree in physical education. “I got the highest grades on the basketball team,” he says, proud.

Jackson State University began to recruit him, but an injury to his ACL ended his college basketball career. He still studied at JSU, though, and currently works part-time at City Hall as a deputy clerk for Councilman Aaron Banks, but he spends the majority of his time with his mentoring group, KCU.

Through KSU, Hopkins ministers to his community, serving more than 200 children across south Jackson in various ways, alongside head coach David King and assistant head coach Sherman Amos. The basketball program plays a large part in KSU’s operations, with the ministry managing four youth teams in the Jackson League as well as operating two independent leagues.

Rather than simply helping children improve their basketball skills, Hopkins, King and Amos endeavor to involve themselves as mentors, visiting the children at school and talking with their teachers to keep track of how they are doing. In some cases, KSU has provided school supplies and even shoes and uniforms to students in need.

“I don’t coach,” Hopkins insists. “A lot of people call me Coach Hopkins, but I’ve never coached a game in my life. I’m like a general manager.” He leaves the actual coaching to King and Amos, who have been with him since the beginning. Hopkins says of them, “You rarely ever find people that are connected to your vision the same way that you’re connected to your own vision.”

During his summers while he attended high school, Hopkins would play in a local basketball league. His coach, Chokwe Lumumba, set an example that inspired Hopkins to similarly serve others and give back to his community.

“My mom was a single mom, and we never had the money to afford to go to tournaments. Coach Chokwe would always let me go,” Hopkins says. “One night, me and Coach Chockwe were having a conversation, and I asked him, ‘Coach Chokwe, how can I ever repay you for what you have meant to my life and what you have done for me and my basketball career?’

“He told me, ‘Martez, son, the only thing that I want you to do is this: I just want you to give back to the community. I want you to reach back, and I want you to touch young people’s lives the same way you see me touching you and your teammates’ lives.’ And I told him, ‘You know what Coach? I can do that.’”

“When Coach Chokwe first passed away, it was so hard, and a lot of times I get emotional like I am right now (during this interview),” he says. “Once I started the mentoring group and the basketball team, (coping with) his death became much easier for me. The name of Coach Chokwe’s basketball team was the Jackson Panthers, and the name of my basketball team is the KSU Panthers. That’s when I began to get better and started dealing with Coach Chokwe’s death in a positive way.”

Hopkins concludes with a final word on KCU’s future. “I want people to understand this: With the mentoring group and the basketball team, we honestly just listen to God’s voice and let him lead and guide us in the right direction,” he says.

For more information on Knowledge Camp University and its basketball and mentorship programs, visit facebook.com/KCUPanthersBasketballLeague.