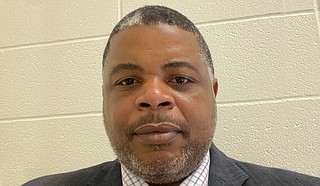 Lifelong Jackson native Johnny Hubbard has served as an adjunct professor of jazz education at Jackson State University since January 2015. He also served as interim coordinator of jazz studies within the JSU's department of music from September 2020 until May of this year, when he left the position.

In addition to his professorship, Hubbard serves as director of JSU's secondary jazz ensemble and the university's Jazz Combo group, which is a smaller group of four to five players.

"I feel that it's my mission to work with students who may have no prior experience with jazz and show them how to approach the genre," Hubbard says. "I love being able to teach aspiring musicians about all the history and tradition behind the music."

Hubbard grew up attending Jackson Public Schools and graduated from Lanier High School in 1990 before enrolling at JSU, where he played tuba for the university's Sonic Boom of the South Marching Band, string bass for the JSU Symphonic Wind Ensemble and Orchestra, and electric bass for Jazz Ensembles I & II.

In 1995, Hubbard postponed his studies with JSU before graduating and entered the workforce. He began working as a performing musician in 1999 at the Hilton Hotel in Jackson for five nights a week, playing alongside a jazz pianist, which he did for over four years. He returned to JSU in 2008 to finish his degree and to work as an assistant professor. He received his bachelor's degree in music education in 2009 and a master's degree in the same subject in 2011. While finishing his degree, Hubbard also began mentoring the JSU Jazz Combo group during the fall of 2010 and spring of 2011.

Hubbard established his own music business, JH Music Enterprise, in 2008. There, he teaches music lessons and chart arrangements for school ensembles and various artists. He also completed a weeklong drill design program in Dallas, Texas, under the leadership of drill designer Dan Ryder in order to expand into the field. Drill design refers to the drills that marching bands perform at large events such as halftime shows.

Over the course of his career, Hubbard has performed alongside artists such as Cassandra Wilson, Wallace Roney, Steve Turre and Bobby Watson and appeared as an upright bassist in the 2014 film “Get On Up.” The Mississippi Jazz Foundation named Hubbard as an honoree of the organization's Distinguished Service Award in November 2019. The award recognizes jazz musicians and educators for consistent growth and commitment to musicianship and creativity.

"I felt privileged and honored to receive such an award from a foundation that brings so many artists with incredible style to perform here in Mississippi," Hubbard says. "I am continually searching for opportunities to inspire, encourage, mentor and train young musicians through the advancement of jazz education and the promotion of performance. I am grateful to all my former band directors and others who mentored me throughout my career, and I feel that spirit of gratitude is what makes me realize the significance of what I do as a music educator."

Hubbard and his wife, Latoya Hubbard, have been married since 2009 and have an 11-year-old son named Jayden.