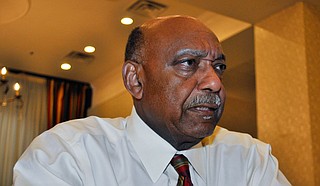 Former Mississippi Department of Corrections inmates with mental-health challenges will be able to get more help from community health centers if the Mississippi Legislature passes House Bill 1341. The legislation will expand outpatient services to the formerly incarcerated as a way to fight recidivism, Mississippi Rep. Bo Brown, D-Jackson, who sponsored the bill, told the Jackson Free Press Monday.

Brown, previously a Jackson City Council member, said it is a long-overdue move that will benefit many former inmates who fall into the category. He is seeking $647,461 for one year of funding between July 1, 2021, and June 30, 2022.

The legislator said that the stories of people who left the custody of the Mississippi Department of Corrections and then became violent because of what he described as a lack of mental-health attention spurred him into action.

"I've known some personal cases that former inmates have been released from the custody of the corrections department, and they act normal for few weeks, a few months, or even a year, then they have a psychological relapse. They go and destroy things, they threatened people and sometimes hurt people because once they're in the community, they're limited … in terms of the follow-up psychological care," Brown said.

An acquaintance wrote him a letter about her sister, Brown said. "(She) was released (from MDOC); after having three or four days a week or so of psychological therapy, they let her out, she went home and shot a person five or six times because they wouldn't keep her in the mental-health facility," he said.

"I know another man that was out, and he has a girlfriend. He was doing well and had been (with) her, with her two or three young boys. And everything was smooth for a year or two because I've known these people," he added. "And then, all of a sudden, because he stopped taking his medicine, he went on a rampage and threatened and destroyed property and all this stuff, and the word was there was no bed at the time in the community-health facility."

Brown has high hopes of the bill becoming law because many lawmakers can identify with the need for such funding.

"I really think that the bill would pass because there's probably several legislators who know somebody, if not even a relative who's experienced that kind of a breakdown (being a) former inmate who's been released back into the community," he said. "I'm almost positive that there are many families that have experienced this, and nobody seemed to have taken a handle on it or thought about it for some reason."

The proposed legislation is now in the House Appropriation Committee.

Many Mississippi Ex-offenders in Dire Need

Brown’s legislation would provide a piece of the healthy-reentry puzzle that has drawn cross-partisan support in recent years, including to reduce re-offending after incarceration.

"Our state is in dire need of programs that can offer ex-offenders a full continuum of integrated care that will improve their functioning and outcomes when they return to their communities," then-Mississippi Department of Corrections Commissioner Marshall Fisher said in 2016. Fisher made appeals for a variety of programs to help reduce recidivism, as the Jackson Free Press reported in our Preventing Violence solutions series.

Disability Rights Mississippi stated in a January 2021 report that “half or more than half of MDOC’s prison population should be receiving or receives some type of mental health treatment.”

"Research shows that when officers are responding to individuals that have been diagnosed with mental-health issues, the chances that that individual has a weapon with them go from 4 percent to just over 40 percent," retired FBI Special Agent in Charge Christopher Freeze, who served as the executive director of the Mississippi Department of Human Services in 2019, told the Jackson Free Press last year.

"And we've got hundreds of them around here in this state, if not thousands, that are living on the edge, psychologically challenged, having served in the correctional system and ready to explode because of a lack of proper mental health care."

"But we see that more and more. There needs to be some kind of enhanced mental-health assistance offered for those types of people."