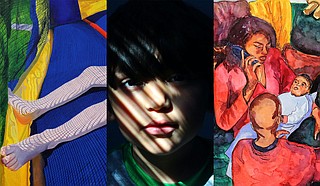 The Mississippi Museum of Art last week announced the winning students from the Mississippi regional competition of the 98th Scholastic Art & Writing Awards. The Alliance for Young Artists & Writers presents the awards, which are the longest-running scholarship and recognition program for creative students in grades 7-12.

More than 100,000 participants from 100 regions across the United States submitted art and writing for the 2021 competition, of which 1,200 works came from 450 students across Mississippi. Jurors selected 81 Gold Keys, 128 Silver Keys, 253 Honorable Mentions and five American Visions nominees.

MMA is exhibiting Gold Key- and Silver Key-winning works in the museum’s corridor through March 21. Honorable Mention-winning pieces are available for viewing on the museum’s website. The museum plans to recognize awarded artists and their teachers during a pre-recorded, virtual ceremony on Sunday, March 21, at noon on the museum’s Facebook page.

On Monday, Feb. 8, Jackson Mayor Chokwe Antar Lumumba announced that the City received a $475,000 grant from the Robert Wood Johnson Foundation to address health, equity and climate change. The grant is part of a $3 million initiative in partnership with 2°C Mississippi and the National League of Cities to bring in ideas from abroad to mitigate the health impacts of climate change in cities across the United States, a release from Mayor Lumumba's office says.

The grant will support a Jackson-based project titled “Adapting nature-based solutions from Spain, Cuba and Japan to address the urban-heat-island-effect in Jackson, Miss.” The goal of the project is to reduce mortality and prevent illness associated with urban heat island effects in Jackson and provide social, economic, cultural and ecological co-benefits for at-risk residents.

A key focus of the project is on medium and long-term heat mitigation strategies, including a combination of nature-based interventions from successful solutions developed in Barcelona, Spain; Havana, Cuba; and Okaya, Japan, the release says. The heat mitigation plan is also part of a broader plan from Mayor Lumumba to take a holistic, systems-thinking approach to health, education and the environment in Jackson.

A release from Waste Management states that trash collectors are experiencing high volumes of garbage and trash along all routes, which may precipitate some delays in service.

Waste Management said in the release that all routes, including residential, commercial and roll-off, will have their trash collected by the end of the week, safety and road conditions permitting.