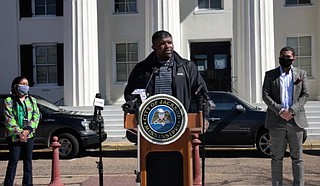 Jackson Director of Public Works Director Charles Williams said he plans to study why the back to back winter weather affected the city’s water system on a large scale. Photo courtesy City of Jackson

As Jacksonians struggle with the aftermath of winter weather that caught the city flatfooted, Director of Works Charles Williams told the city council yesterday that it might happen again soon.

"I think when we look at these weather patterns, this is going to happen again," Williams told the Jackson City Council at an emergency meeting Monday. "And so we're going to need to be prepared for the next time.”

“And so we'll be working, putting energies toward that in order to limit the effects of these particular events again,” he added.

Much of the capital city is still without water as the treatment plants' water pressure has not fully recovered after the system failure recorded last week because of sustained low temperature.

"As of last week, we dropped to a pressure around 37 psi, which is well below the levels that are needed in order to supply the city of Jackson with water," the director said. “As of today, we're at 67. So we are dramatically improving the system in order to get water into the system."

Because the water flow in the city is elevation-based, Williams said places farthest from the treatment plants—west and south Jackson—will suffer the most sustained water outage.

"Over the next couple of days, we hope to continue to increase; I'm hoping that we can at least get up to 75 psi today and hopefully tomorrow get around 80 to 85,” he said.

Williams expects the system to be fully back by the weekend, and he is still grappling with what causes the system to be more compromised than usual. “We had to buy some equipment in order to get where we are right now," he said. "A lot of our equipment froze up because we could not get above 32 (degrees)," he said.

The director hinted that more than half of the city do not have water available, and that the aim is to ensure a majority of the city has water by Wednesday and “full restoration by the end of the week."

After Ward 2 Councilwoman Angelique Lee explained that many houses in her ward still do not have power, Mayor Chokwe A. Lumumba explained that Entergy is battling with trees falling down on electricity poles.

"So what made it challenging for them is that it was dispersed all across the city that they had 19,000 homes that were without power," he said. "And so they couldn't just go out and reattach those power lines.”

“They had to actually cut the big tree limbs; they had to get tree cutters to go out and cut the limbs at all of those locations first so that they can safely make those repairs."

Ward 3 Councilman Kenneth Stokes said the people in his ward could not flush toilets and feel hopeless. He asked for water tankers to help them. The council later passed an emergency order authorizing money for water-tanker leasing, garbage disposal and water-system repairs.

Stokes said each ward should have a tanker to supply water to the people who are staying in houses smelling of feces from filled-up toilet bowls because they cannot flush. At various times since the crisis began, the administration has announced locations where there is potable and non-potable water distribution.

"They can't see to the other week; they see a house that smells like boo-boo, and they see a toilet bowl full of boo-boo, and most of these are older people," Stokes said.

Where to Call with Water Pressure Problems

"We ask for residents to reserve 311 for visible leaks and urgent needs of assistance," the mayor said.

Lumumba said plans to mitigate a recurrence include covering up the water-treatment plants with specially designed structures to provide protection from cold weather, and that progress had been made on that front prior to the recent winter weather.

The works director, at the press briefing, asked the public to call in if they see water trickling out into the pavement to form wet spots, as increased water pressure affects water mains.

"We're going to need a sustained, systematic plan moving forward of how we can replace those pipes. And that's going to take funding and resources," Williams said. "South Jackson and parts of west Jackson are taking the brunt. We know that there's isolated pockets in different areas, but hopefully as the pressure improves, they will see that restoration a lot quicker.”

“But, right now, definitively, we know that south Jackson and some parts of west Jackson are completely without water. So that's why the distribution and having the tanker trucks available are important."