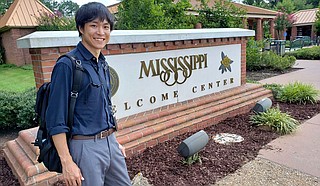 Daiki Suematsu, who has served as the Japanese Outreach Initiative Coordinator for Jackson State University since 2019, is preparing to host the first-ever Japan Fest in partnership with the Mississippi Museum of Art on Sunday, July 18.

As Japanese Outreach Initiative Coordinator, Suematsu works to promote Japanese culture within JSU and in other schools and communities across Mississippi. He has spent the last two years working with JSU on behalf of the Japan Foundation, an incorporated administrative agency of the Japanese government that hosts comprehensive international cultural exchange programs worldwide. The Japan Foundation and the Laurasian Institute manage Suematsu’s program.

Japan Fest will be Suematsu's last major project before his two-year fellowship with JSU comes to an end. Japan Foundation, Nissan and Unipres Corporation sponsor the event.

"My hope with this festival is to give Mississippi something unlike anyone has seen here that will promote Japanese culture in a place where not many people may know of it," Suematsu says. "I want the participants to experience what a real Japanese festival is like, with traditional yukata, toys, crafts and food, and help build stronger relationships between my country and the U.S."

Suematsu was born in Osaka, Japan, and received a bachelor's degree in international studies from Kobe City University of Foreign Studies in 2013. He worked for an automotive part manufacturer called Denso for six years before signing on with the Japan Foundation and coming to JSU in 2019.

"One of my goals was to become a teacher in Japan, and international studies caught my interest particularly because of the benefits of learning another language," Suematsu says. "I want to be able to present more options to Japanese students, and learning to speak English effectively can create many opportunities."

Japan Fest will be free and open to the public and will take place at the Mississippi Museum of Art (380 S. Lamar St.) from noon to 4 p.m. on Sunday, July 18. The event will include taiko drum performances, kendo displays, calligraphy, Japanese dance performances, crafts and toys, artwork and more. For more information, visit discoverjapan-mississippi.studio.site.