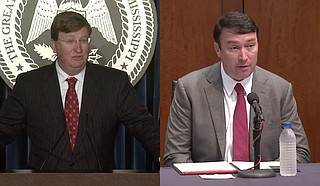 In a significant increase to the State of Mississippi policing footprint in the capital city, the Capitol Police will now extend its jurisdiction over the Capitol Complex Improvement District, Gov. Tate Reeves and Mississippi Department of Public Safety Commissioner Sean Tindell announced yesterday. The new “Capitol Safety Initiative” also means that the Mississippi Highway Patrol will now operate along state highways within the city limits of Jackson, and that state drug enforcement will increase in the capital city.

"House Bill 974, which transferred the Capitol Police to the Department of Public Safety and Senate Bill 2788, which allowed the Mississippi Highway Patrol to operate stationary radar within larger cities, gave us the greater opportunity to help the City of Jackson and our capital by utilizing state assets and resources to help protect the citizens of the state of Mississippi, and in particular, those within the capital city," Tindell said at the press briefing on Wednesday.

“The Capitol district extends from Jackson State University, all the way to I-55 and up into the Fondren area, or just past the University of Mississippi Medical Center."

The Capitol Police previously operated under the Department of Finance and Administration and focused on protecting Capitol Complex and state properties. It is now transferred to the Department of Public Safety and will focus on the more than 8.7 square miles of the CCID, which the State Legislature established in 2017, which attracts yearly state funding for infrastructural improvements inside the zone. The capital city covers 106 square miles.

"Within the Capitol complex district, Capitol Police will be saturating its resources along the streets of the capitol district, ensuring that all available Capitol police officers are mobilized in their vehicles, creating a greater visibility within the Capitol district," Tindell said. "Lastly, the Mississippi Bureau of Narcotics will be increasing its clandestine drug operations with its federal and state and local partners within the city of Jackson."

The commissioner said he has a goal of having 600 highway patrol personnel, 150 Capitol police officers and 150 Mississippi Bureau of Narcotics officers overall. Their present number is 520, 81, and 92 respectively.

The governor confirmed that he did not invite any City of Jackson officials to join him at the press conference.

Not Unique to Jackson

Gov. Reeves said similar operations occur regularly across the state and are not peculiar to Jackson but would help the City better focus its resources.

"These saturation missions, as it relates to the Mississippi highway, are not unique to the city (of Jackson). These are missions that take on regularly. Just within the last four to six weeks," he said. "I am personally aware of one that took place in and around Oxford as well as one over the July 4th weekend that took place on Interstate 10 in conjunction with Louisiana state police and Alabama state police."

In Oxford, the Mississippi Free Press has reported, policing and narcotics enforcement are under scrutiny for controversial actions and missing funds, and have a disparate impact on Black and Brown citizens. It has also led to a citizens’ police transparency effort there due to past problems.

"And so, we are excited about the prospects of doing our part and look forward to working with our sister agencies in state, local, and federal law enforcement to continue to work to improve the situation as we find it in the city of Jackson," Reeves added. "This is not a police force that's going to be policing the streets in every area of the city of Jackson; that is not the role that the state plays."

The governor used Ward 3 Councilman Kenneth Stokes' call week for the deployment of the National Guard to the capital city to justify the operation.

"I think the mere fact that Councilman Stokes is begging for help speaks to the significant problems from a crime standpoint in the city of Jackson. And I appreciate the fact that he and I are in agreement that we have to get a crime under control in the city," Reeves said. "Now, his specific request, as it relates to the guard, is a whole other matter."

"They are not an arresting entity. We don't want to have a capital city, which has military uniforms spread throughout it. Number one, those officers typically are not trained for that; and number two, I don't think the look is very good."

The governor encouraged the City of Jackson and Hinds County to use $97 million in combined COVID-19 federal relief funding to address water, sewer and increased law-enforcement needs. He suggested that "many of these murders and homicides that are being committed now are being committed by individuals that appear to have been arrested recently and let out on bail."

The governor did not provide any proof of this assertion and did not comment on the number of homicides that have taken place within the Capitol Improvement District. In addition, legislative debate indicated earlier this year that the increased policing in Jackson was meant for misdemeanor arrests—people who have the clear legal right to post bail if they can afford it.

Reeves said the criminal-justice system in the city, county, and state needs improvement and that the spate of crime is not unique to the city of Jackson, citing other larger cities across the U.S., and then blaming supporters of policing reform in the wake of many unarmed Black Americans killed by police, including in Jackson.

"The increase in crime is occurring in virtually every intermediate size to larger cities in America—not in all of them—but in virtually every single one of them. And in large part, I think it goes back to this idea that some have that we ought to defund the police." The City of Jackson increased the pay of some police officers last year, and recruits got a 15% increase.

The Senate bill removed the prohibition of the Mississippi Highway Safety Patrol using speed-detecting radar on highways in municipalities above 15,000 in population.

"The legislation in large part was in response to what occurred on or around the night of New Year's Eve in which the entire interstate was shut down for some nefarious acts," Reeves said.

Saying he appreciated the governor’s move to increase police engagement in Jackson, Mayor Choke A. Lumumba urged state authorities to start paying attention to root causes of crime and violence.

"The City and Jackson Police Department welcome the commitment to greater collaboration and support," the mayor said in a statement released Wednesday. "However, we must also apply the same effort toward authoring solutions that address the root of the problem."

"The State has failed to provide adequate funding in this regard," he added. "In order to realize true impact, it is necessary to also stand up and bolster the social supports and community programs that lift up our communities by addressing issues of poverty, joblessness, mental health, gaps in education and opportunity, and more."

Republicans in the Mississippi Legislature have routinely blocked the state’s legal requirement to fund the Mississippi Adequate Education Act to ensure that poorer schools have basic resources, to name one example.

Tindell said Wednesday that since the two bills went into effect on July 1, the Mississippi Highway Patrol has issued 87 traffic citations and more than 14 DUI citations within Jackson to date. "So already, there's been an increase in the presence, and that presence will continue to grow with this saturation," he said.