Jackson Resident Gets $36,000 in Compensation After Sewage Backed Up Twice In Home 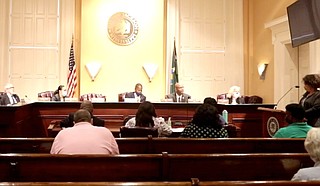 Ruby Holden (standing right) addressed the City Council on June 22, explaining how sewer backing up in her home twice in 2020 left her devastated. Photo courtesy City of Jackson

Sixty-four-year-old Ruby Holden, who stays at Hickory Cove in Southwest Jackson in Ward 4, will get $36,696.32 as compensation for the City's vacuum truck backing up the sewer into her home twice in 2020. The City council approved the payment as an emergency item on Tuesday, July 20.

Earlier, at the June 22 City Council Meeting, Holden, who had stayed in Jackson for over 30 years, laid out her ordeal, describing how she woke up at 5 a.m. on Oct. 28, "to a stench," and discovered raw sewage in her house. "It was in both bathrooms. It was in both toilets," she said. She reached out to the City officials, and the vacuum truck came to her house at 3 p.m. that day. She said the bad situation became worse shortly after because the truck pushed more sewer into the house.

"I know the sound of when they start to push the button to apply pressure to clean the city's main source," she said. "And I'm standing in my kitchen, and this is what I see coming towards me; I didn't know what it was. It looked like lava flowing down a mountain. That's the best explanation I can give it."

"I ran outside, and I'm screaming, and I asked him to stop, but because the truck was running, they couldn't hear me. So I ran to the edge of the street, and I'm just screaming, 'Stop, stop, stop. You're blowing it in my house.' So at approximately 3:15 p.m., my home was filled with raw, untreated sewage."

Holden shared pictures she took with the council members and explained that she had to stay in a hotel for six weeks. The City cleaned the house and Holden moved back in but she lived the nightmare again on Dec. 23, 2020.

"(Near) Christmas, at 11:45 p.m., I'm sitting in my living room watching television, and I noticed there's something coming near the fireplace. It took me a minute to just try to figure out, ‘What are you looking at?’ Then it hit me. It can only be one thing. I ran to my hallway bathroom, and the toilet is like a water fountain, and I've got sewage going everywhere."

The City sent a vacuum truck shortly after. "At approximately 12 o'clock (that day), the truck came again. And I kept saying in my mind, 'This wouldn't happen again,' but again, I heard that famous sound of that truck getting ready to blow the sewage," Holden continued.

"What they did was on both occasions, rather than blowing the sewage through the pipe, they blew it all back into my home. So I ran outside again. At that point, I was hysterical." She explained that "four inches of raw sewage" covered her house. The City later cleaned the house and sent a contract to find the cause of the problem.

Holden explained how the second incident further damaged the house. Because after the first incident, things in her home were removed, including the flooring, sinks and carpets.

"When it happened the second time; because everything had been removed from the home—the sheetrock, the flooring—it really made the situation worse," Holden said. "Once they pulled everything out, that simply made the sewage flow directly into the walls, into the studs."

"The only thing that I am seeking and asking is that my home be put back together. That's really all I'm here for today."

Ward 6 Councilman Aaron Banks, before the council voted to approve the payment on Tuesday, said that many residents of both his ward and Ward 4 face similar issues. "We get a lot of issues that arise from sanitary, sewer overflows into residents' houses," he said. Banks asked the City to ensure that "when residents have these complaints, that they're still not in a situation where they ended up having to sell their property, their house, ended up in the worst situation at something that is at the fault of a sanitary sewer flow on our end."

In May, the Jackson Free Press reported that in April, a couple living on Ferncliff Drive in North East Jackson sued the City of Jackson for $500,000 over damages caused by sewer backup in their house one year before. The case is still unresolved.

As part of ongoing efforts to resolve sewer overflow problems in the City, the City Council on Tuesday approved $1,869,980 from American Rescue Plan Fund to Waggoner Engineering/Andrew Jenkins, LLC for Sanitary Sewer Evaluation Services to identify problems in the sewer system. The City asked the company to submit the proposal. On May 25, the City Council had greenlighted the pursuit of a $30 million revolving loan for sewer repair. On May 11, the City Council approved $247,500-contract for Compliance EnviroSystems LLC for 45-day clean-up of portions of the sewer system “to minimize the occurrence of sanitary sewer overflows within the city of Jackson.”