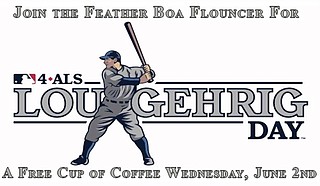 In honor of the inaugural Lou Gehrig Day on Wednesday, June 2, Broad Street Baking Company in Jackson is hosting an event from 7:30 a.m. to 10:30 a.m. in which speaker Katrina Byrd will hold a conversation on Amyotrophic Lateral Sclerosis, also known as "Lou Gehrig's Disease," with free coffee for visitors.

Lou Gehrig was a Major League Baseball first baseman who played 17 seasons for the New York Yankees beginning in 1923. He was diagnosed with the neurodegenerative disease ALS in 1939 and died on June 2, 1941. Lou Gehrig Day is intended to create awareness of ALS and others who the disease impacts.

Byrd, who also goes by the name "Boa Flouncer," joined "I AM ALS," an organization that advocates, educates and promotes ALS awareness, after her friend Dora G. Robertson—former faculty secretary at Millsaps College—was diagnosed with ALS on Nov. 18, 2019 and later died on Feb. 2, 2020. She is also participating in Trii State Trek, a fundraiser raising money for ALS research.

For more information or to make a donation towards ALS research, visit https://tst.als.net/fundraise/?p=57259.

Online volunteer registration for the upcoming 2021 Sanderson Farms Championship golf tournament is open as of Tuesday, June 1. The tournament will take place from Sept. 27 to Oct. 3 at The Country Club of Jackson (345 St. Andrews Drive).

Volunteer positions include serving as a gallery ambassador, competitions support as a laser operator or ball spotter and walking the course as a Pro-Am caddie or standard bearer.

Each volunteer will receive a package including a Sanderson Farms Championship logoed golf shirt and hat, a volunteer credential, four Good-Any-Day tickets, the opportunity to play a round at The Country Club of Jackson during Volunteer Play Day for those who work at least 20 hours, food and beverages during volunteer shifts, and an invitation to the Volunteer Party. The volunteer package is valued at more than $300, but the volunteer fee is only $50, a release from Sanderson Farms says.

Members of Insurance Protection Services have curated and delivered hygiene packs to Shower Power, hosted clothing drives and supported the nonprofit with monetary donations. During the COVID-19 pandemic, which prevented IPS agents from physically visiting Shower Power, the organization instead sponsored a clothing drive and contributed funds to help clients stay in hotels during extreme weather.

The Make More Happen Award includes a $5,000 donation with a chance to double the amount to $10,000, which will directly benefit Shower Power MS.

On May 26, the story of IPS and Shower Power went up on the official Make More Happen microsite agentgiving.com/Insurance-Protection-Specialists, allowing the nonprofit a chance to earn the additional $5,000 if the featured story receives at least 500 shares to social media and comments on their story.

The $10,000 donation will go toward expanding Shower Power's ministry and improving its warehouse, and will go toward Project Hope, a housing initiative to provide shelter for clients.

Throughout 2021, Liberty Mutual and Safeco Insurance will select 34 independent agents nationwide for a Make More Happen Award, donating up to $340,000 to the nonprofits they support. Agencies became eligible for the award by submitting an application demonstrating their commitment to a specific nonprofit, along with photos of a project they worked on.