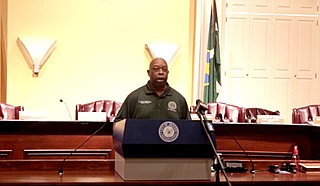 Parks and Recreation Deputy Director Abram Muhammad explained that the department is working to improve the Jackson Zoo at a press conference on Wednesday, June 2. Part of that is taking care of its staff. Photo courtesy City of Jackson

The status of workers at the city's zoo will change from contract employees to city employees starting Sunday, June 6.

“We're steadily improving on every aspect of the zoo, right down to the employees that we have there, that we are proud to announce that will be coming on board this Sunday and becoming city employees, and so we're very, very excited about what we're going to be offering at the zoo," Parks and Recreation Department Deputy Director Abram Muhammad said at a media briefing on Wednesday, June 2.

The ordinance explained that following the termination of the City's zoo management arrangement with the Jackson Zoological Society Inc. and then the negotiations with ZoOceanarium to take over that did not work out, the City has been running the zoo with contract labor.

Ward 3 Councilman Kenneth Stokes asked what will happen to the new positions if another management company comes on board. Department of Parks and Recreation Director Ison B. Harris Jr. said that the positions will transfer to the new management.

"If we decided at a later point to (have on) a management company, (this new arrangement) would not apply at that point; then they would actually take up all the positions," Harris told the city council. Currently, he added, the City does not have requests for proposals out for a company to manage the zoo.

The director said workers need to become city employees to stop the zoo from hemorrhaging workers. “We’ve been losing valuable people," he told the city council.

At the Wednesday press conference, Deputy Director Muhammad encouraged people to visit the zoo. "We have moved from, as some of you may know, from just weekend operations to now Thursday through Sunday. And the times of operation will be from 10 a.m. to 4 p.m," he said. Admission is $8 for 13 years and older, $5 for ages two to 12 and free for ages 2 and below.

The deputy director explained that a shortage of lifeguards is hampering the full opening of the City of Jackson's pools for the summer and offered to help train and certify anyone interested.

"We were looking to open this Friday (June 4), starting with Grove pool (1905 Northside Drive)," he said. "The hours of operation would be from 2 to 5 p.m. for all of the pools. And they'll be on a rotating basis, meaning that until we get more lifeguards," Muhammad said. Admission is $3 for ages 18 and above, and $2 for ages 17 and below.

The "tentative running schedule" is on the City's website. Muhammad said it is subject to change based on the availability of lifeguards.