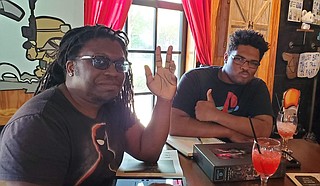 Dogmud Tavern, a sister company of Certifiable Studios in Ridgeland, allows customers to play board and video games while they dine and drink. Photo courtesy Dogmud Tavern

For a number of Jacksonians, the new year motivated them to make some changes in 2021, namely in the local food industry. Since January, the metro has welcomed new restaurants presenting foodstuffs from varying culinary backgrounds. Now that 2021 is halfway over, let’s take a look at some of the selections now available to our food scene.

Dogmud Tavern’s interior features decorative artwork from the studio’s various gaming properties, including “Endangered Orphans,” “Who Goes There?,” “Stuffed” and “D6,” most of which Labbe designed.

The pub serves its own custom-made namesake brew “Dogmud,” a dark lager which is available on draft. Other available draft beers include Colsons, Sopro Suzy B, Abita Andygator, Yuengling and Destihl Key Lime Go. The pub offers more than two dozen other beers in either cans or bottles.

Visitors can play board games from Certifiable Studios as well as games such as Catan, Splendor, Ticket to Ride, Betrayal at House on the Hill and more at gaming tables that double as dining tables. A full list of Dogmud’s available board games is available in the Games tab of the business’ website, dogmudtavern.com.

Each Thursday from 7 p.m. to 9 p.m., Dogmud Tavern hosts Trivia Night at the Tavern. Entry costs $5 per person. Winners receive cash prizes, and drink specials are held throughout the weekly event.

The shop is located inside a building that formerly housed Planet Donut, which a friend of Phann’s owned. Phann renovated the building’s kitchen so that A’HA could be more than just a donut shop, he says.

“’A’HA’ means ‘food’ in my home country of Cambodia, and I chose the name both for that and because I want people coming here to have their own ‘aha’ moment whenever they try the food,” Phann says. “I have had a passion for food for a long time, and I knew that people in Pearl would love to have quality donuts and burgers without having to drive all the way out to somewhere like Madison for them. I want people craving that kind of thing to be able to come to us.”

“I’ve loved working with food ever since my grandparents would let me join them in the kitchen as a kid, and I even have my own garden for growing fresh food and seasonal items,” Sumrall says.

“I’ve been following Cultivation Food Hall ever since it opened and wanted to bring something to it that had a southern flair along with flavors you might not ordinarily find in restaurants here.”

Sumrall previously served as a member of the management team for Cultivation and worked as a cook at the food hall’s Americana and Yo Mama’s restaurants.

Lost Pizza and El Potro at Outlets of Mississippi

El Potro Mexican Bar & Grill offers authentic Mexican dishes such as fajitas, taco salads, burritos, chimichangas, enchiladas and more. The restaurant’s owners have been in business in Mississippi since 1995.

For store hours and other information, visit outletsofms.com/brands.

In addition to scratch-made donuts, District Donuts offers sandwiches made from locally sourced ingredients and small-batch roasted coffee.The Jackson restaurant will be the seventh district location, with others in New Orleans, Baton Rouge and Las Vegas.

District Donuts’ new location is at the corner of Manship and North Jefferson streets in Belhaven.The restaurant will include indoor dining and outdoor patio seating. The Belhaven Town Center is currently renovating the space ahead of District’s arrival, which is set for mid-July.

Brown named the restaurant in honor of his grandmother, Hattie McCullough, who passed away in 2020 during the COVID-19 pandemic.

In addition to chicken and waffles, the menu at Hattie’s will include chicken sandwiches and chicken tenders in original or Nashville Hot flavors, fries, greens, macaroni and cheese, honey rolls and Rap Snacks chips. The restaurant will have a patio as well as a drive-thru and curbside service.

Know of a restaurant that opened in 2021 that isn’t included on this list? Email [email protected] with the tips!