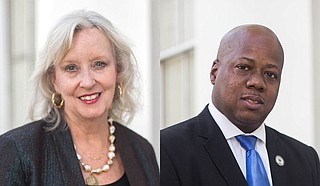 Pickett is one of the founders of National Waste United, whose emergency garbage-disposal contract with the City was nullified after the council rescinded the mayor's Sept. 17 emergency declaration on Sept. 22, then settling for the short-term contract with the current provider on Sept. 30.

Pickett, in the Oct. 17 filing with the Hinds County Circuit Court, alleged that Banks told Lindsay and some people "on or about Sept 17" that he had offered Banks a $50,000 bribe to favor National Waste United by not rejecting the mayor's emergency declaration. Pickett added that he met Banks "in and around August 2021."

"During that meeting, Mr. Banks explained to Dr. Pickett the perks he had received from the current solid-waste vendor," Pickett’s brief alleged. "Mr. Banks made it clear to Dr. Pickett that if a new vendor could not provide him similar perks, then he would not be interested in a new vendor obtaining the solid waste contract."

"(Lindsay) perpetuated the slander by telling the mayor that Dr. Pickett offered Mr. Banks money in exchange for his support," he charged.

Lindsay declined to comment on the matter in a Nov. 5 text message to the Jackson Free Press. "This is a matter of litigation, and I cannot comment at this time," she wrote.

On Oct. 20, Senior Hinds County Circuit Court Judge Tomie Green recused herself from the case "based on prior knowledge and persons involved." Judge Adrienne Wooten is now in charge of the case.

Councilman Banks denied Pickett’s allegations, and in a court filing on Tuesday, Nov. 9, asked the court to dismiss the case.

Pickett: 'It's Pretty Serious to Me'

This reporter called the New Jerusalem Church office number on Monday, Nov. 8, and the receptionist transferred the call to Pickett's assistant, who said the reporter should call back on Tuesday. The pastor did not respond to this reporter's call two times on Tuesday, after which the reporter went to New Jerusalem church at 168 Colonial Drive and met Pickett there.

Pickett said he was in a meeting and led the reporter to his assistant, who showed him that the assistant had sent a text to Pickett by 1 p.m. asking if he wanted to grant an interview. Pickett replied after 3 p.m. that he needed to check with his attorney. The assistant said he will give a response to the reporter when he gets one from Pickett. He has not done so at press time.

However, Pickett granted an interview to WJTV's Gary Burton Jr., who reported it in an Oct. 19 report.

"Aaron Banks told people I offered him $20,000 and told Virgi Lindsay that I offered him $50,000 for a vote regarding a contract, which is absolutely not true," Pickett said in the video interview. "I can't even fathom in my mind why he would make such an accusation in my mind. Literally, it has kept me up at night."

In that report, Pickett's attorney, Tremarcus Roseman, said that he intends to pursue damages.

On Oct. 22, Councilman Banks held a press briefing to give his version of what allegedly happened. He claimed that Pickett indeed had offered him a bribe, but not to vote in favor of National Waste United, but to vote for FCC Environmental Services Inc. on Aug. 19, the second time the mayor presented that contract to the council, after its earlier rejection on Aug. 9.

"It is absolutely true that during the course of the recent and highly publicized trash collection bidding, I was approached by Dwayne Pickett on Aug. 17 (two days before the second vote), and he told me that if I supported one of the bids, he would give me $50,000," Banks told the press in October.

"This was to be paid out of the half-million dollars of profit (Pickett) anticipated that he would make," Banks added. "At the time he was encouraging support for the FCC bid on the council’s second vote."

"At that time," he also said, "National Waste United and the emergency declaration was not in play, and apparently, Pickett was somehow tied to FCC."

Banks alleged further that based on his conversation with Pickett, the senior pastor expected to get a $2.5 million contract to build a place for FCC in Ward 5—$500,000 a year for the next five years—and he promised to give the councilman 10%, or $50,000, to get him to switch his vote. Banks had earlier voted against the FCC contract on Aug. 9.

That day, and again on Aug. 19, the order failed before the Jackson City Council in a 3-4 vote. Only Lindsay, Ward 2 Councilwoman Angelique Lee and Ward 4 Councilman Brian Grizzell voted for it both times.

"He also called me that morning and said, 'Banks, come on! $500,000—that's a lot of money'; and that was the morning (of Aug. 19) before the vote," Banks added, public accusations Pickett denies.

‘What Is Waste Management Doing?’

During his Oct. 25 appearance at a Facebook Live event with Jackson-based Othor Cain Media, Banks explained the issue from his perspective.

Banks told Cain that Pickett asked him on Aug. 17, "What is it going to take? What is the cost? Everybody's got a price."

"He then went on to say, 'What is Waste Management doing?'"

Banks told the Jackson Free Press by phone on Monday, Nov. 8, that Waste Management has been sponsoring the Mississippi Municipal League for many years.

"So I was talking about an ongoing relationship."

Pickett: Banks Continues to Slander Him

Pickett, however, in his amended complaint on Nov. 1, said that Banks’ Oct. 22 press briefing and the Facebook Live interview are the continuations of Banks’ "smear campaign" against him, indicating that Banks’ allegations against him are false.

"Defendants have maliciously and intentionally defamed Dr. Pickett, causing irreparable harm to Dr. Pickett's reputation as a pastor and local leader within the community," the amended legal filing stated. "Specifically, Dr. Pickett has experienced extreme mental anguish and suffering as a result of Defendants' false statements, for which he has sought medical treatment."

Banks said that 15 minutes after his Aug. 17 conversation with Pickett, he told then-interim City Attorney Monica Allen about it.

"Stunned by the suggestion (of receiving a bribe), I told Dwayne Pickett (on Aug. 17) I could not and will not be induced to commit this crime and ended our conversation," he said at the Oct. 22 press briefing.

"That same day, within 15 minutes, recognizing the seriousness of what had just transpired and wanted to document this event, I immediately, under attorney-client privilege, shared this with the city attorney's office, and I spoke directly with Monica Allen."

Allen resigned in September from the City effective Sept. 28, and Mayor Lumumba has since appointed Catoria Martin as the new city attorney. After this reporter reached out to Allen on the phone on Friday, Nov. 12, she declined to comment on the issue.

Banks said at the press briefing that, after the Aug. 17 conversation with Pickett, he shared his "concerns with the council president, who I understand, generally conveyed my concerns to the office of the mayor."

"Immediately thereafter, Pickett began a public campaign to distance himself from what he knows he did," the councilman added. "I believe this too (lawsuit) to be a part of that campaign."

None of the public allegations reported in this article, which is quoting two sides of a legal dispute, have been proved in a court of law.