‘A Dream of Mine’: Tyree Jones Wins Sheriff Election 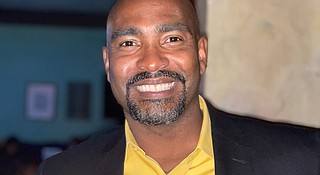 The previous sheriff's election on Nov. 2 featured a crowded field of 13 candidates, with Jones and Crisler emerging as the two with the most votes. At the time, Crisler scored over 2,000 more votes than Jones, and because neither of them scored more than 50% of the votes, the contest proceeded to a run-off, which took place yesterday.

Jones told the Jackson Free Press yesterday at Hal & Mal's restaurant, where he held his victory party, that the result was a call to service.

"Well, as you can see, the people trusted me; they trusted the vision that I have as it relates to moving Hinds County forward."

The new sheriff said that he will continue to reach out to the people and focus on addressing the problems in the county, including working to ensure that Hinds County Detention Center fulfills the demands of the federal government's consent decree.

"We have an issue that's going on in the city of Jackson with violent crime," Jones added. "You have to address that, but you can't forget about all of Hinds County—rural Hinds County, those people still want to see increased visibility."

"So we’ve got to continue to address those things, and I am prepared to go into office to do so."

In a Tuesday evening interview with the Jackson Free Press outside of the 4th Avenue Lounge in downtown Jackson, Crisler expressed regret over his loss and said that the people's political engagement needs to improve.

"When you have 166,000 people registered to vote, and less than 20% of those people decided to vote, it's certainly disappointing, to say the least," he said. "We'll recalibrate, we'll get some rest, and we'll analyze this situation and reevaluate what we can do in order to be more successful in our efforts to create a safe environment for our community."

"We wished much success for my opponent," Crisler added. "I certainly do want to congratulate him for running a great race."

In his advice to the new sheriff, former City of Jackson Mayor Tony Yarber, who spoke with the Jackson Free Press at Hal & Mal's, said that Jones needs to build a good team around him.

"The cry here is that we do something about violent crime in the city and in the county," Yarber advised. "So I think that people elected a lawman, somebody that they trusted, who they've seen reduce crime, a member of a team that's done it."

Former Hinds County Sheriff Lee Vance died in August, after testing positive to COVID-19, creating an opening for the position. The Board of Supervisor thereafter appointed Crisler as interim sheriff.