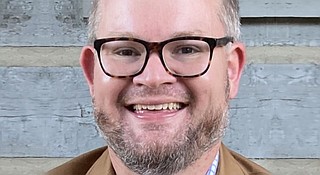 Madison resident Brad Martin has served as a program administrator with the Mississippi State Department of Health's Office Against Interpersonal Violence since October 2021. In his position, Martin coordinates with the Mississippi Department of Justice's Office of Violence Against Women to oversee programs on domestic-violence prevention and services for sexual-assault victims in the state.

Previously, Martin had served as director of comprehensive cancer control for MSDH since January 2020, until taking his current position in October 2021. His office collaborated with the Centers for Disease Control and Prevention, who funded them, to lead early cancer detection, screening, prevention and survivorship efforts in Mississippi, as well as conducting virtual symposiums for cancer survivors and their caregivers and a virtual health-coaching program.

"I have been working in state government for (approximately) 16 years and love doing everything I can to help the people of Mississippi," Martin says. "I decided to take on my new position in October because this was a topic area I had never been involved in but wanted to help out with. I wanted to learn about helping people in a different capacity to be the best public servant I can be. I want to know that I can provide life services to the people in the state I love."

Martin was born in North Carolina and moved with his family to South Carolina, Georgia and Alabama before settling in Mississippi during high school. He graduated from Oxford High School in Oxford, Miss., and enrolled at what is now Belhaven University, which was then Belhaven College. He transferred as a sophomore to the University of Mississippi, where he received a bachelor's degree in exercise science in 2003.

After graduating from UM, Martin began working with the North Mississippi Regional Center as a recreation therapist for community homes in Batesville, and then as a vocational training instructor in Oxford, returning to a recreational-therapist for community homes in Pontotoc. He later worked as a support coordinator for families of individuals with intellectual or developmental disabilities who received waiver services from the Mississippi Department of Mental Health.

In 2010, he began working as a graduate assistant at UM while working toward a master's degree in health promotion, which he received in 2012. While there, he worked with the university's Health Exercise Science and Recreation Management department, as well as the Safe Routes to School program, which helped create programs for children to become more physically active.

Martin first began working with MSDH in 2012 in the Office of Tobacco Control, where he partnered with tobacco-free coalitions in Mississippi and the Youth Tobacco Prevention program. He served as the state employee wellness program director, for which his main role was to promote healthier worksites for state-government employees.

"I felt motivated to eventually work in the health sector ever since I started playing sports growing up and became interested in everything that went into physical health," Martin says. "I saw how important living optimally is for a person's health and knew I wanted to be a resource for people who have questions about their physical and mental health."

In addition to his work with MSDH, Martin has been a Madison County Younglife Capernaum ministry leader, a Christian-based, volunteer youth ministry program for special-needs children, since 2017. He was an American Cancer Society's Real Men Wear Pink of Central Mississippi ambassador in 2020, raising funds for breast-cancer awareness and research, as well as a "Wish Hero" for Make a Wish Mississippi in 2021, raising money for children with critical illnesses in the state. Between the two campaigns, with the help of generous donors, Martin. helped raise nearly $11,000.