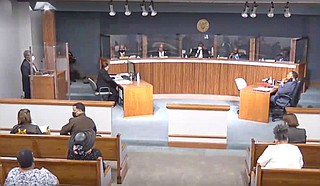 On Oct. 12, the recently launched Hinds County Reentry Program will see 21 applicants start a two-month course, called “Thinking for a Change." The director of the county’s reentry department, Louis Armstrong, told the Hinds County Board of Supervisors on Monday, Oct. 4, that the goal for the cause is to help the participants gain a renewed mental state.

T4C incorporates research from cognitive restructuring theory, social-skills development, and the learning and use of problem-solving skills, National Institute of Corrections, which facilitates the program, says.

"A stipend will be paid to those attending that six-week program, which is required of all our clients before they are assigned to a workforce-development program because we want to make sure that they are mentally ready to change their decision-making process," Armstrong said Monday. “‘Thinking for a Change’ is a cognitive intervention program that has been proven nationwide to be very successful in getting our clients to rethink their decision-making."

Armstrong, formerly a member of the Jackson City Council, spent one year in federal prison after pleading guilty to accepting a bribe to influence a council vote in 1999.

In an interview with the Jackson Free Press on Wednesday, Armstrong declined to name the nonprofit he said will fund the stipend, because the parties have not finalized the agreement. The nonprofit will also provide financial-literacy training,

After finishing with the “Thinking for a Change” program, participants will go into one-to-two months of workforce-development training, depending on their training choice. Armstrong said on Monday that Hinds Community College has agreed to foot the bill for the workforce development after initially charging the reentry department a fee.

"They will begin a training program at Hinds Community College in (fields like) construction, manufacturing and warehouses," he said, adding that the department has a $239,000 budget for the year and that nonprofits are providing various support.

"We have met with employers who have agreed to hire our graduates, so when they graduate on a Friday, they start working on a Monday," he said, "So the program is moving forward; it is going to be a tremendous success in addressing the crime problem.

“In areas that have started reentry programs in recent years, the immediate impact is a 30-35% reduction in crime due to a reduction in recidivism."

He said that the 21 inaugural participants come from a pool of over 50 applications received since the Sept. 1 launch.

"There are a number of factors that we use to determine who is selected for the program, he told the Jackson Free Press Wednesday. “ At least three or four of the applicants didn't qualify because they had sex offenses.”

“And of course, we use other criteria to determine their qualification, including the risk factor,” he added. “We are targeting high-risk individuals for assistance. The ones most likely to recidivate at the end are the ones we are focusing on."