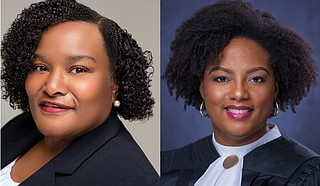 Greta Mack Harris and Carlyn McGee Hicks are both running for the position of Subdistrict 1 Hinds County Court Judge. The election will be held on Nov. 2. Photos courtesy web

After Melvin Priester, Sr. resigned on June 3, 2020, as Subdistrict 1 Hinds County Court Judge, the Mississippi Supreme Court appointed Carlyn Hicks in his place. In the election to fill the position scheduled for Nov. 2, Attorney Greta Mack Harris joins Hicks on the ballot.

Harris grew up in Edwards, Miss., and completed her education at Tougaloo College and Mississippi College School of Law. While in Tougaloo College, she enlisted in the United States Army Reserve.

“I have been a lawyer in courtrooms across the state of Mississippi, primarily in Hinds County, for approximately 25 years,” she said in an email statement she sent in September to the Jackson Free Press. “I have worked as a prosecutor and criminal-defense attorney.”

Harris wrote that she worked in youth courts as a special assistant attorney general and handled civil matters as a private lawyer. In 2018, she contested for the Subdistrict 1 county judge position against Priester and Bridgette Marie Morgan and came in second.

In the statement to the Jackson Free Press, she wrote that, if elected, she will use her years of experience to ensure that she hears civil cases assigned to her within 180 days of case filing. The county judge handles civil cases involving up to $200,000 settlements.

“If I am assigned to the criminal docket, I pledge to hear criminal appeals in under 90 days of them being filed in County Court,” she said. She explained that county courts hear appeals from city courts, justice court and felony criminal matters before indictment.

Harris said that if assigned to the youth court docket, her goal is to “deter the youth from ever being introduced into the criminal-justice system.”

“I would also work to reduce the number of juveniles charged as adults and detained at the Henley Young Patton Detention Center,” she wrote. “There is an increase in our community of youth offenders, and I am committed to working within the criminal-justice system to rehabilitate our youth.”

She remarked on the effects of homicides on Jackson families, which also balloons circuit court caseloads. She said the Mississippi statute allows the senior circuit judge to appoint the county court judge as a special circuit judge to relieve some of the caseloads from other circuit judges.

“My experience makes me uniquely qualified to serve in that role, in any capacity, on Day 1. I’m the only candidate in the race with the experience to hear both criminal matters and civil matters that involve juries sitting as triers of fact,” she said, touting her prosecutorial record.

“Throughout my career, I have fought for what is right, and I will take that perspective to the bench,” she said. “My record in Hinds County is one of fairness and reasonableness when defendants are willing to take responsibility for their choices; however, when defendants don’t want to take responsibility, I have a reputation of taking cases to trial and asking a jury to make the determination.”

Before she was appointed Hinds County Subdistrict 1 court judge, Hicks practiced law for over a decade in the greater Jackson community representing “underrepresented and marginalized groups,” she wrote in a statement to the Jackson Free Press in September.

“I bring to this position not simply legal experience, but administrative experience, servant leadership, innovation, and a record of proven effectiveness and results-oriented practices,” she wrote.

“I have a passion for service and making a difference, which drives my commitment to the community,” she added. “I actively mentor law students and new lawyers and serve as an adjunct professor of law, shaping the minds of legal scholars who desire a career in the legal field.”

Hicks wrote that since her assignment as a judge, she has heard over 3,000 matters, closed or resolved over 600 cases with a focus on efficiency to eliminate delays, and “instituted new diversion programs and interventions, (while taking) no days off.”

She presided over the Hinds County Youth Court, where she said she has “been able to help stabilize our foster-care system and help move children to permanency and develop innovative diversions for our young people.” She also implemented regular stakeholder meetings and convened a quarterly roundtable of law enforcement.

In addition to establishing a work program, mentorship program and runaway-prevention program—obtaining recertification of the drug intervention court—Hicks wrote that she worked to address stagnation in cases involving child victims of felony abuse, neglect and sexual abuse.

“This led to the establishment of a dedicated Child Advocacy Center for Hinds County residents and a Hinds County Multidisciplinary Team comprised of a blend of law enforcement, stakeholders and service providers designed to ensure no child victim slips through the cracks and that their needs are being met,” she wrote.

“Since those two things have been implemented, there have been arrests made in every case where there has been a substantiated felony-level allegation.”

Hicks said having judicial experience stands her apart in the race.

“I am committed to the equal treatment of all who appear before me, and I am fair to all in the pursuit of justice,” she wrote.