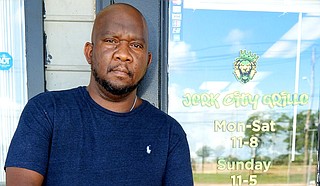 Following the success of Jerk City Grille as a food truck, owner and chef Wendell Brewster opened a physical restaurant to sell his Caribbean food. Photo by Delreco Harris

After years of working in the food industry, Ridgeland resident Wendell Brewster decided “it was time to invest in myself” and opened a food truck in April of this year. Just a handful of months later, Brewster expanded his business, Jerk City Grille, by establishing a physical restaurant on Robinson Road in Jackson.

Growing up and spending much of his life in Augusta, Ga., Wendell moved to Mississippi in 2013 and joined Thompson Hospitality, a company that specializes in providing food service to HBCUs. In fact, Brewster served as executive chef for Mississippi Valley State University for three years in addition to a number of other positions with Thompson Hospitality, such as food service director and corporate chef.

“I got a chance to see a lot of different things,” he says. “It sparked my interest in doing my own mobile food business. And then, with the pandemic happening, things sped up a little bit. It seemed like that was where the food train was going in the food industry.”

While studying the food scene in the Jackson area, Brewster noticed that Caribbean cuisine appeared to be underrepresented in the metro, and he felt that he could fill that niche. While his father was born in Barbados, his South Carolina-native mother is the one who taught Brewster how to cook, and she specialized in southern comfort. Thus, Brewster knew he had to become more familiar with Caribbean food if he wanted to succeed.

“I started studying the ingredients, the methods, what makes it tick—took it all apart and put it back together and added my own little flair to it, which sparked Jerk City Grille,” he says.

Public reception to Jerk City Grille’s food has encouraged Brewster and affirmed that his hard work has already begun to pay off.

“Everything we serve here is flavorful, different and exciting,” Brewster says. “Whether it’s our pasta, our oxtails or our marinated meats, you’ll be able to tell that all our ingredients are handled with care. We even have items I consider whimsical for a Caribbean restaurant, like our jerk wings, rice and egg roll combo.”

In addition to Jerk City Grille’s food, Brewster also takes pride in the business’ beverage options. The chef crafted a signature lemonade recipe in 2005 that he sells at the restaurant, and he has created other drinks that spawn from that concoction, such as passion fruit lemonade, mango lemonade, and a pineapple ginger beverage that is traditionally served with Caribbean cuisine.

Currently, only the indoor location is open until Brewster hires and trains more staff members to man the food truck, which he hopes to get up and running again soon.