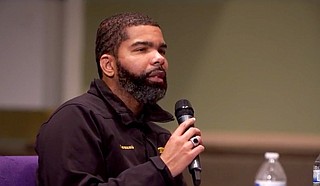 The City-owned Little J railroad from Valley Street toward Highway 80 will become a multi-use trail after the Jackson City Council green-lighted the project on Tuesday, Aug. 31.

"While we've been doing walking trails in various parts of the city, we wanted to connect west Jackson, make sure that there were no parts of our city that were left out, and this Little J actually helps contribute towards that connection with the other walking trails," Mayor Chokwe A. Lumumba explained at the city council meeting.

"This is important for creating a sense of place and opportunity throughout our city, (and make) certain we leave no area of town out."

The city council approved the use of the $1,721,790.68 remaining after the completion of the road project from Highway 18 to Highway 80 and construction of a multi-use trail from Yarbro Street to West Highland Drive from the 2005 congregational earmark for Lynch Street improvements.

"This (project) requires a 20% match that is already set aside, which results in a total available project cost of $2,152,238.35," interim Public Works Director Marlin King wrote in a memorandum dated Aug. 19. The Mississippi Department of Transportation will oversee the project.

City Traffic Engineer Robert Lee said the longtime goal is to connect various parts of the city with a trail system. "It is a transportation earmark for the Jackson state corridor,” he added. “We've used this to repave Lynch street from JSU (Jackson State University) going west out to Highway 18. And with these remaining funds to construct this trail to parallel Lynch street from JSU going west.”

Director of Planning Jordan Hillman said such a trail can drive economic development, and she intends to have a city-wide master plan for pedestrian and biking trails.

Members of the Jackson City Council hesitated to approve increased compensation for the City’s data scientist Lacey Loftin on Tuesday. After Council President and Ward 7 Councilwoman Virgi Lindsay moved to approve the administration pay increase, it died without a second. Mayor Lumumba then asked for a second for the purpose of discussion. Council Vice President and Ward 2 Councilwoman Angelique Lee then seconded the motion.

Then-Acting Chief Administrative Officer Marlin King wrote in an Aug. 12 memorandum attached to the order that the recommendation is to increase the payment for Loftin's services from $68,000 covering July 1, 2020, to March 31, 2022, to $99,250 for the same period, an increase of $31,250. The funding for the City Data Scientist is part of the W.K. Kellogg Foundation-funded “Economic Pathways to Human Dignity: Building Occupational Opportunities & Economic Growth” project in the City.

"She's our data scientist that helps us with our COVID-19 task force. She provides information of ongoing challenges," the mayor said as he introduced Loftin after Lee seconded the motion. Chief of Staff Safiya R. Omari added that Loftin has helped the police identify areas that needed attention based on the high crime rate.

Ward 6 Councilman Aaron Banks said it is not enough for Loftin to mention a website where she has her work product, but that the council needed a presentation. "I think one of the things that will help ease some of my unreadiness is to see some measurables on some of the work that's actually done—just a presentation informing us," he said.

"I know there's some work being done, but at this time, maybe we need to know a whole lot more. And then you got new colleagues up here that weren't here previously when those are agreements we've made."

Lee said the request for more money for Loftin should attract more scrutiny. "My reluctance is we don't see any deliverables. We don't see the data. And so before we approve some more money at the tune of $99,000, we would like to see something," she said.

Ward 5 Councilman Vernon Hartley wanted to know more about Loftin’s work. "Some of us aren't as familiar with your product, how the public can react, how to tie the public in," he said. "I would love to hear more information before we proceed."

Loftin explained some of her work with the City's data. "You can go to open.jacksonms.gov and see a plethora of all the data and also the chart in Tableau Public as well," she said. "These sites have been up for two years."

She later said she can provide the requested briefing, and the council tabled the item for later in the meeting. One hour later, she said the MacBook does not have an HDMI port to display the slide on the screen for public viewing. The Council subsequently passed the order to increase her compensation by a 5-1 vote. Ward 1 Councilman Ashby Foote voted against it, and Ward 4 Councilman Brian Grizzell was absent.