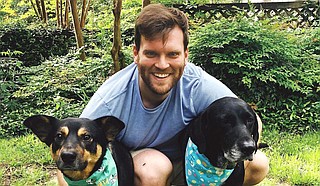 John David Lewis harbors a love for Jackson that he has carried with him throughout his life and especially now in his current position as deputy director of the Department of Human and Cultural Services for the City of Jackson.

“For me, what I love about working for the City of Jackson is that it is a public service,” he says. “I can keep my interest in the betterment of Jackson strictly because I want it to flourish.”

Lewis grew up in the Belhaven area and presently lives in the house his mother called home during her youth. He graduated from Jackson Academy in 2010 and subsequently enrolled in Mississippi State University, where he graduated in 2015 with a bachelor’s degree in architecture. Lewis credits his undergraduate career as the time his passion toward Jackson blossomed.

Each year, architecture students would attend a field trip to various cities around the country. “We’d go to all these great cities and see all these beautiful public spaces and buildings,” Lewis says. “I always thought that I’d want to move somewhere and build skyscrapers, but what became very clear, and quickly, was that I saw that this could be done in Jackson. I became interested in how to make that (growth) happen in the city that I called home.”

Moving back to Jackson, Lewis began to work in the private industry while pursuing a master’s degree in urban and regional planning from Jackson State University. He also worked as a project specialist for the Greater Jackson Arts Council, with whom he helped organize creative projects such as the “Welcome to Jackson” mural, the Mississippi Light Festival, the Obama Magnet Elementary School mural and the Community Paint Wall. In addition, Lewis has also served as the vice chairman of the board for Team JXN and presently serves on the advisory council for Downtown Jackson Partners.

As deputy director of the Department of Human and Cultural Services, Lewis oversees the cultural-services division, which, at its core, comprises Jackson’s five arts and cultural institutions. He has also assumed the role as the home base and point of contact for all things arts- and culture-related for the city. “One of the things I love to do is connect people—to find out what they are trying to do, what their dreams or aspirations are, and connect them to the resources that our city has,” he says.

Two major projects occupy the bulk of Lewis’ time. The first is the renovation of the Russell C. Davis Planetarium, which is a $14 million project that should be completed by late spring 2023. “While it might take time, I want to make sure it is done right,” he says. “My definition of it being done right is a pretty high bar. The two museums (Museum of Mississippi History and Mississippi Civil Rights Museum) have a very high bar, like Smithsonian-level quality facilities, but I’m raising that bar (for the planetarium)”.

The second long-term project that Lewis is working on is the bicentennial celebration of Jackson, which will start at the end of this year and run for 13 months. “We wanted to rethink what it means to celebrate a bicentennial: to look at the past, to look at the present and to the future—who we are now and where we are headed—in a really positive way,” he says. “We want everyone to have access to and ownership of the Jackson Bicentennial.

Lewis and his wife Mary Lee have been married for almost four years now. While they knew of each other during high school, they didn’t fully connect until halfway through Lewis’ undergraduate career at MSU. “We were friends for a long time,” he says. As that relationship shifted to something more romantic, Lewis’ mother gave him some advice: “David, don’t marry someone you can live with. Marry someone you can’t live without.” Reflecting on those words, Lewis says, “I immediately thought about Mary Lee and haven’t stopped thinking about her since.” The couple lives in the Belhaven area with their two dogs, Sam and Jack.

To keep up with projects the Department of Human and Cultural Services has under development, click here.