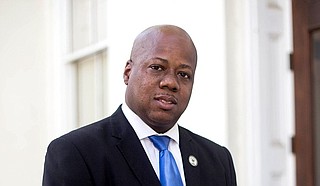 At a Sept. 2 special Jackson City Council meeting, Finance Committee Chairman and Ward 6 Councilman Aaron Banks defended the council’s action to reverse its plan to spend $1 million to rent jail beds in Holmes and Yazoo counties for people charged with misdemeanors and to fund an increase in the number of Hinds County deputy sheriffs working in the capital city. Photo courtesy City of Jackson

The Jackson City Council has reversed its controversial 2020 decision to use $500,000 to rent jail spaces in Holmes and Yazoo counties for people charged with low-level misdemeanors in the capital city, as well as to direct $500,000 to deploy an increased number of Hinds County deputy sheriffs to the city.

"We were able to come to the agreement that instead of raising the millage rate by one mill to give raises, (we would) rescind the set-asides for those two items so that we can now take that million and put it into the budgets of the police department and fire department," he said. "We'll give a raise to our corporals and also our LDOs (Fire Department lieutenant driver operators) and our dispatchers to $15 an hour."

"Legally, there was a judge that ruled that we weren't able to (send misdemeanor detainees to other counties), so we're not able to do that,” Banks added, though he did not name the judge. Sheriff Lee Vance and Ward 3 Councilman Kenneth Stokes had brought the $1 million idea to the council, Banks added, but Vance “is no longer our sheriff anymore, and God rest his soul," he said. Vance died on Aug. 14 after testing positive for COVID-19. Marshand Crisler, a former city councilman, is the interim sheriff.

‘Let’s Give Everybody a Raise’

The two motions passed 6-1 with Councilman Stokes as the lone holdout. He said that it is not a good excuse to mention a judge's objection, as an appeal was in order, adding that there is a need for increased attention to the security needs of the city. Stokes argued for the use of COVID-19 relief funds for pay increases across the board. The City of Jackson qualified for $42 million in COVID-relief funds.

Stokes said that he learned that the federal funds will not be used for salary raises because it is one-time money. He argued that the $1 million allocated to rent jail beds and fund deputies is also a one-time funds, so he does not buy the argument for not using the federal money for raises.

"So I prefer we leave the fund balance money where it was earmarked, and we use some of this federal money, not just for police and fire, but for all state employees. It's important that we do not divide city employees (into) haves versus the have-nots," he added.

"When it's cold, and public works (workers are) in those holes, trying to fix those pipes, they feel just like a police officer and a fireman. They need more money. So I would hope that we'll use some of this federal money if it's not illegal, and let's give everybody a raise."

Banks clarified that the orders do not automatically apply the money for any salary increase, but discussions will occur before a final approval for the fiscal-year 2022 budget by the Sept. 30 deadline.

"The action today—just to be clear and for the sake of the public—all it does is rescind that money back into the fund balance, because that's where we took it from," Banks said. "And then we still have time to deliberate and to talk during our budget sessions, before we make a decision on actually where that money goes and how we deal with any ordinances (on the federal money)."