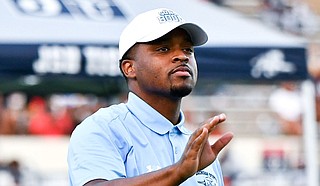 Dockers recently featured Roderick Little, director of bands at Jackson State University, in the most recent entry of its "Recognize" storytelling series. The series, which Dockers launched in February 2021 in honor of Black History Month, features regular interviews with African Americans who have had a profound influence on their local communities.

Little, who has held his current position as director of bands since the summer of 2020, is among the youngest band directors in JSU's history. He appeared in the August entry of "Recognize" for his contributions to the university's Sonic Boom of the South marching band. Little first joined the JSU faculty in 2012 and previously served as marching band director, associate director of bands and assistant band director. The focus of his "Recognize" appearance was on his relationship with his students and the importance of music and the arts for the Black community.

"On a personal level, whenever I see my students I see myself," Little says. "Students at historically Black colleges and universities often share a common background in coming from low-income areas like I did. I have a vested interest in ensuring their academic success first, with the music program coming afterward. I use the musical arts as a vehicle to help my students to achieve their academic goals."

Dockers contributed $1,500 directly to Sonic Boom of the South for Little's participation and also offered him a $5,000 stipend, which he donated to the band as well to support student scholarships.

"I wanted to make sure everything went to the students, which is why I wanted to do this in the first place," Little says. "When you get a platform like this, it's important to use it to get the word out on HBCUs and their needs to help students who need assistance. Beyond that, the most critical thing students need is for you to be present as a role model and show them that you can dedicate time to the things you love while staying committed to education. You need to carry yourself in a professional manner and teach them how they can utilize that in their futures."

Little was born in Jackson and came from a musical family, with his siblings and parents all performing in bands when they were in school. He started playing music at age 6 when his sister first showed him an electronic keyboard and eventually took up percussion in middle school. He graduated from Lanier High School before enrolling at JSU on a band scholarship, after which he joined the Sonic Boom. Little received a bachelor's degree in youth education from JSU in 2007, a master's degree in music education in 2011 and a doctorate in higher education administration in 2019.