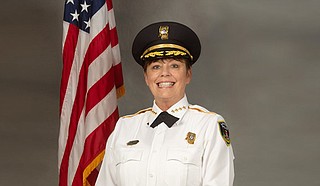 The University of Mississippi Medical Center named Mary Eileen Paradis as its first female Chief of Police and Executive Director of Public Safety in July 2021.

Paradis previously served as assistant vice president of safety and security at Marymount University in Arlington, Va., where she oversaw the university's Office of Safety and Emergency Management. In her new position at UMMC, Paradis' first priority has been working toward obtaining accreditation for the police department there through the Commission on Accreditation for Law Enforcement Agencies.

"As Executive Director of Public Safety and Chief of Police, there is a great deal of overlap in regards to working with the university's emergency management and lab safety workers," Paradis says. "That's part of why I've been taking a holistic approach to safety and security for the campus and its institutions and working closely with both my officers and the civilian dispatchers who act as our front-facing personnel."

Paradis was born and grew up in Chigalo, and comes from a line of family members who served in law enforcement there. Her great-grandfather, Michael Ryan, became an officer after immigrating to Chicago from Ireland. Her grandfather, Joseph Sheahn, and her father, James Swank Jr., were also Chicago officers.

She received both her bachelor's degree in professional studies in police and security studies and her master's degree in professional studies in cybersecurity strategy and information management from George Washington University in Washington, D.C. While there, she earned the Distinguished Scholar Award, the Academic Achievement Award and the Dr. Richard F. Southby Police and Science Prize.

Paradis first became an officer with the Chicago Police Department in August 1986, and was one of the first female law enforcement officials in her district. She served as an intelligence officer until 1997, when she moved to Washington, D.C. with her husband, Peter Paradis Sr., who works within the Federal Inspectors General community. She later became the interim police chief at George Washington University before moving on to Marymount University.

In addition to her duties as UMMC's police chief and Executive Director of Public Safety, Paradis also works with the UMMC-affiliated Jackson Free Clinic, which provides health care to people who lack medical insurance. She is currently helping to organize the clinic's upcoming "Pumpkinpalooza" Halloween event and assists in giving out car seats for children to inner city families in Jackson.

"A big part of why I came to UMMC is because I saw a great deal of opportunities to give back to the community here in Jackson," Paradis says. "What's most important to me is raising the bar with policing through the accreditation process and stressing the benefits that UMMC offers for education. Being engaged in education makes you get better at what you do here, as does sharing a common bond with the students and faculty. I'm always on call here, and it's a very demanding position, but it's important that I'm here on behalf of the staff that are here 24/7."

Paradis and her husband have two sons. Their oldest son, Peter Paradis Jr., is a recent graduate of Longwood University’s Criminal Justice program and has enrolled in the Rappahannock Regional Criminal Justice Academy, where he is completing training to be a certified deputy sheriff with the Goochland County Sheriff’s Office in Virginia. Their younger son, Patrick Paradis, is a senior at the University of South Carolina and is completing a double business major in finance and economics.