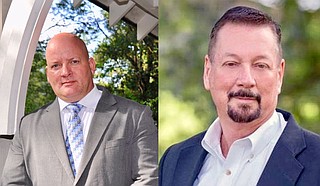 Richard Spooner and Les Tannehill, veterans of the Hinds Sheriff's office, are among the 13 candidates running for Hinds County sheriff. They decided to throw their hats into the ring after Lee Vance, elected to the position in 2019, died after a COVID-19 infection diagnosis. The non-partisan special election to fill the job is on Nov. 2.

Spooner is a 1989 graduate of Wingfield High School, Jackson, and a lifelong Hinds County resident. He is a former United States Marine and a 22-year veteran of the Hinds County Sheriff's Office.

"I started my career as a detention officer in the Hinds County Detention Center. From there, I was promoted to the Patrol Division, the Narcotics Division, eventually being promoted to the Commanding Officer of the Narcotics Division with my final position as the Commander of the Warrants Division," he wrote in a Sept. 12 email to the Jackson Free Press. He also served 19 years on the Hinds County Sheriff's Department Special Response Team.

"I have several areas of specialized training along with several awards including Hinds County Sheriff's Department Officer of the Year, Mississippi Center for Police and Sheriff's Top Cop award with several letters of commendation for service above and beyond the call of duty," he added.

"My focus and priority will be a dual approach. The first is to improve the conditions of the Hinds County Detention Facility in Raymond and come out from under the Consent Decree established by the Department of Justice. The second will be to reduce crime in Hinds County," Spooner wrote in a Sept. 12 email statement to the Jackson Free Press.

"My message to the people of Hinds County is simple. Crime is once again on a record-breaking pace with no end in sight; the Hinds County Detention Center is in horrible conditions for both the staff and the detainees. On November 2nd, let my experience and training work for you to reduce crime and make Hinds County a safe place once again."

Spooner competed in the July 2019 democratic primary election to the Hinds County Sheriff Office, in which Vance emerged the winner.

Tannehill is also a lifelong Hinds county resident. Like Spooner, he vied for the democratic ticket in the 2019 primary election for Hinds County sheriff. He competed for the same position as an independent candidate in 2015.

After graduating from Terry Academy in 1974, Tannehill began his law enforcement career in Hinds County Sheriff's office in 1978. He attended Jackson Training Academy in 1980 and later joined the Jackson Police Department.

In 1992, he joined the Hinds County Sheriff's Department under Sheriff Malcolm McMillin. He left the sheriff's office in 2006 and started Affirmative Investigations and Security LLC. On June 16, 2021, Sheriff Lee Vance swore him in as a Hinds County Deputy.

Tannehill told the Jackson Free Press in a phone interview on Sept 10 that he will follow the footsteps of former Sheriff Malcolm McMillan if elected. McMillan was sheriff from 1991 to 2011. He died in 2016.

"He had a very unique system of law enforcement that included programs that not only assisted victims of crime but also inmates who were coming out and trying to rehabilitate their lives," Tannehill said in the phone interview.

He said he will use inmates' labor for trash pick-up, grass cutting and emergency response after a storm, saving resources.

Tannehill ran for Hinds sheriff in 2015 and for mayor of the City of Jackson in June 2021.

"For too long, we look at either color or party affiliation instead of trying to put the right person in the office," he said. "If we don't do something different, we don't l elect experienced and qualified law enforcement officers, then the city and county's just going to fall into utter collapse."