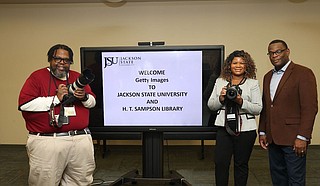 Getty Images recently donated two Canon camera bodies and three Canon lenses to the Office of University Communications at Jackson State University as part of the company's new partnership with the university. JSU is participating in the inaugural Getty Images Photo Archives Grant for Historically Black Colleges, an initiative aimed at preserving and amplifying the visual history of HBCUs.

Getty Images photographers and editors will mentor JSU students and provide best practices for using the equipment ahead of major events on campus, including collegiate sports and graduation ceremonies. JSU plans to put the equipment to use for the upcoming Blue and White Game on Saturday, April 9, as well as the spring game that the university will televise nationally on ESPN on Sunday, April 24.

Funding from a recent Getty Images grant will support the digitization of 50,000 archival photographs from JSU's library, including future images captured with the donated Canon equipment. Archivists and librarians from the H.T. Sampson Library at JSU will work alongside the Getty Images’ team in the photo digitization process. Adnet Global, a post-production agency that specializes in the digitization, restoration, and discoverability of visual analog historic libraries, will also participate.

The stand-alone photo collection created as part of the partnership, the “Historically Black Colleges & Universities Collection,” is now available for licensing on gettyimages.com, with more images to be added throughout 2022. JSU will also begin distributing photography from campus life and sporting events through Getty Images in 2022.

MSU’s Office of Research and Economic Development is sponsoring the event, which will celebrate and showcase university faculty, staff and students advancing their fields and making an impact in Mississippi and across the globe, a release from MSU says. Events will include research center tours and showcases, panels, lectures, exhibits and more, culminating with the 2022 Spring Undergraduate Research Symposium.

Exhibits from MSU research centers, institutes, support units and academic departments will be on display all week on the first floor of the Old Main Academic Center. Select research centers will be open for tours, visits and conversation from 10 a.m. to 2 p.m. on Monday, April 11, and Tuesday, April 12. MSU will highlight its innovation-based startup companies from 10 a.m. to noon on Wednesday, April 13, during the Innovation Enterprise Showcase at the Center for Entrepreneurship and Outreach in McCool Hall.

The University of Southern Mississippi launched the largest fundraising campaign in its history, "Give Wing: The Campaign for Southern Miss," on March 26, 2022. The campaign, which aims to raise funds in support of academics and athletics, including student scholarships, faculty support and facilities, has a goal of $150 million.

"Give Wing" consists of three priority pillars: student success, academic excellence, and innovation and discovery. USM has raised $109,445,458 to date, which is roughly 73% of the fundraising goal.

Campaign goals include increasing undergraduate scholarships, programmatic support and facilities for students, endowed faculty professorship and director positions and elevating USM’s research enterprise. The campaign will also fund new and upgraded facilities, including the Quinlan-Hammond Hall of Honor, the new home for the Center for Military Veterans, Service Members and Families, Pete Taylor Park and other athletic facilities.

For more information on "Give Wing," visit givewingtosouthernmiss.com.